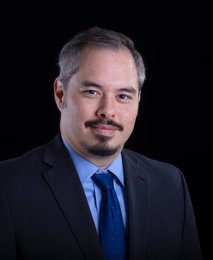 Jason Lather was born and raised in the tropical US territory of Guam.  After graduating high school there, he enrolled at the University of Pennsylvania, where he was part of the second class ever of the prestigious Huntsman Program in International Studies and Business.  Jason graduated from Penn with degrees in Business from the Wharton School and International Studies from the College of Arts & Sciences.

After returning to Guam for one year to fulfill his scholarship obligation, Jason found his way to Northern Nevada.  He met Oksana, the love of his life, and they both moved to Reno to pursue educational and employment opportunities.  Jason received his Masters of Business Administration degree from the University of Nevada-Reno while working in several industries, including gaming and distribution/logistics.  He then discovered the small but interesting field of community management.  Jason was one of the top community managers in Northern Nevada for five years, but he realized that he enjoyed one aspect of his job more than any other: THE LAW.

In 2008, Jason applied to one school, UNLV-Boyd School of Law.  He was accepted with a full scholarship, and excelled at his studies. Jason graduated in 2011, in the top 20% of his class.

Jason and his wife welcomed their first son, Donovan, while he was in law school.  Jason also began working as a law clerk, part time during the school year and full time during the breaks.  Their second son, Nathaniel, was born two years later.

Jason has worked for several attorneys over the years, including some you've probably seen on TV or billboards.  Along the way, Jason discovered a knack for litigation, especially for research and writing.  One of his bosses called Jason "the best writer" he'd ever seen.  While working for one of the largest injury firms in Las Vegas, Jason was the writing specialist -- writing every motion and pleading for the firm.

But Jason also wanted to do more than write.  He wanted to make sure that his clients were getting the attention that they deserved.  He also wanted to do more to help the community by doing pro bono work for those who could not afford to pay a lawyer.  The only way to do all of that was to stop working for others and to be answerable to no one but himself.

Jason and his wife moved to Las Vegas thinking that they would only be here for three years.  Over a decade later, Las Vegas is still their home.

If you need legal assistance, call us.